Use a morning routine to build healthy habits quickly

I love my morning routine.

It’s amazing that most of us have 25,000 mornings in our adult lives between the age of 18 to 80.  Morning activities for most people range from the bare minimum (shower, dress, coffee, and… go!) to potent time chunks that are used to magically automate key life habits that would under other circumstances require willpower to achieve.
I accidentally stumbled on the power of morning routines about 10 years ago. At first what I was doing hardly qualified as a routine. There were just a couple habits linked together consisting of Julia Cameron’s Morning Pages (a free-flowing creative writing exercise where you write down 3 pages of anything) and a couple glasses of herbal tea. Now, I still do the Morning Pages digitally using 750words.com, and I still drink Rooibos tea, but over the years I’ve been adding other delicious habits that now run almost on auto-pilot. By doing the same key things repeatedly, it helps get the things I care about accomplished early in the day when I actually have the energy to do them. 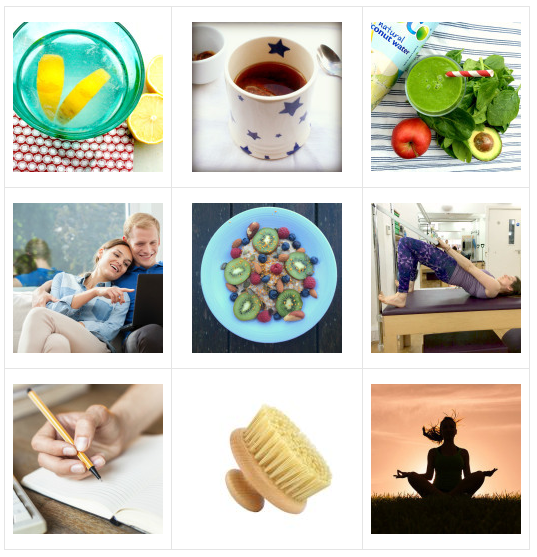 So what are morning routines and why are they so important?

Routines are simply a series of linked habits. Each habit is performed until it’s fairly automatic, and then you simply link a new  habit onto an existing one. For example, one habit that most of us have every day is showering. Something I’ve linked to my shower habit is dry body brushing. I don’t have to think about this anymore. The effort came mostly when first learning the habit: buying the body brush, deciding to leave it out on the counter the night before my shower, and thinking about doing the body brushing for the first few times. After that, things quickly became habitual and now there is very little willpower used up in doing the activity.

Willpower is highest in the AM and depletes with use

One of the most extraordinary things I discovered reading Switch: How to Change Things when Change is Hard, by Chip and Dan Heath, was that our self-control is finite, and depletes with use.  We have a reservoir of self-control that we dip into through our day and willpower draws it down. Unfortunately it’s not the only thing that feeds off this energy source.  Decision making, colds and even PMS, as well as controlling and managing our emotions, thoughts and impulses also uses up this pool of energy. As Heath says in this great 4 minute video, “we’re not lazy, we’re exhausted,” and he suggests that’s why change is so hard.

The good news is there is a way to reduce the amount of willpower required to get important things done in our lives. If you remove the constant decision making surrounding “should I do x or y right now”, you can minimise the energy required to run your life.

Dr. Mehmet Oz mentioned in a recent interview that “in order to make as few decisions as possible to save this energy for later in the day, I automate everything before noon.” His morning routine includes stretching, bathing, yoga, breakfast, reading, and time with his wife. Lots of things happen but they are pre-decided which eliminates the need to waste energy thinking about them every day.

“Waking up early sets the tone of ‘making a choice’ for my day.. if I choose to get up early and do amazing things in those quiet hours, that’s when I feel like I’m grabbing hold of my life and controlling where I go.”  – Joel Gascoigne, CEO at Buffer

A one-minute daily tool to keep you on track 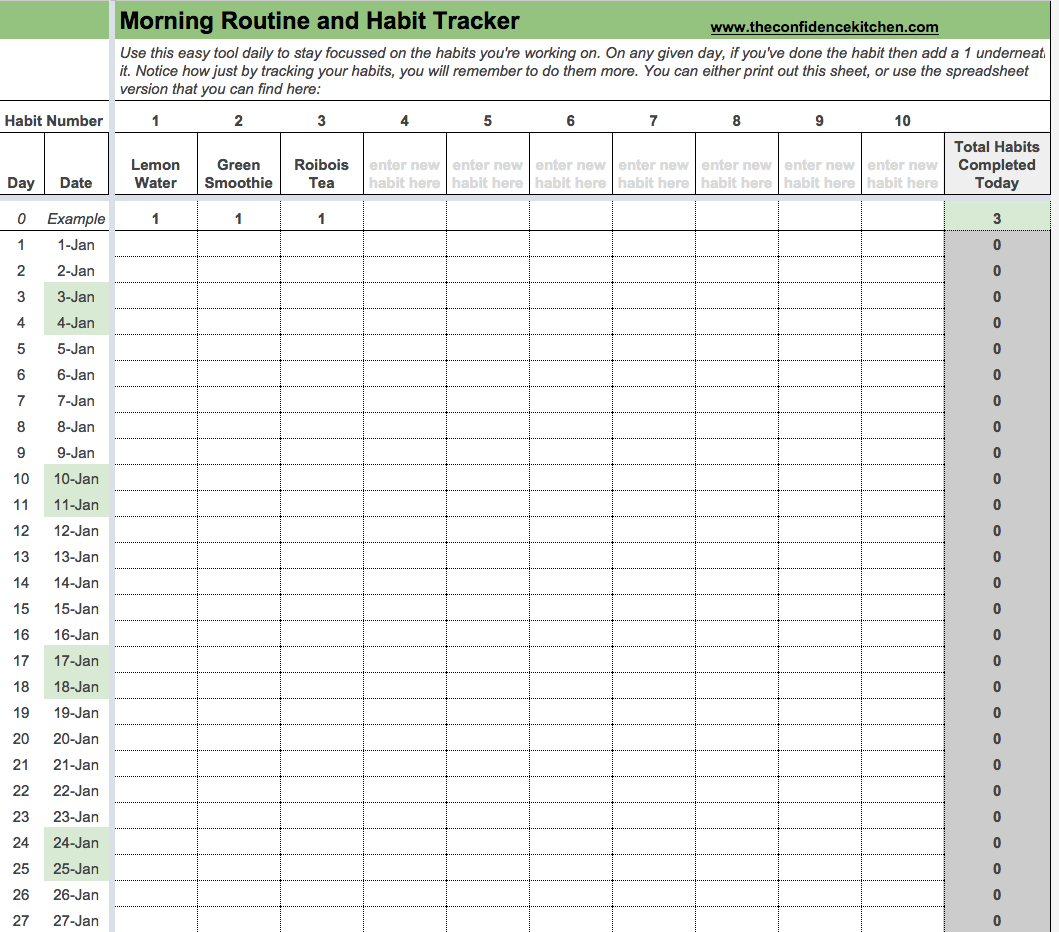 I’ve been using this basic habit tracker for a daily routine more than 2 years now. After trying many different ways of tracking habits, including a basic calendar, project management software like Basecamp, Evernote, Lift, Strides, and WinStreak, nothing has been as effective as this little spreadsheet for keeping tabs on habit progress. I still use the other tools for the things that they are specifically good for (most do much more than just track habits), but for ongoing results, this tool is my personal favourite.

Part of the beauty of tracking habits is that you start to notice what you are doing each day. No day is perfect. Let me set the expectation right up front that you’ll have plenty of gaps on your habit tracker. My habit tracker has grown over the years from  just a few simple habits done in the morning to a whopping 27 habits that span the entire day. That seems like a crazy high number if you assume I get all 27 done every day. I don’t. But I keep tabs on what I do and don’t do – consistently – and I adjust accordingly. It’s really easy to see the big picture – and it takes about one minute a day to open up the spreadsheet and add a “1” to indicate that you have done one of your habits.

My priority habits are done roughly 85% of the time, barring things like holidays, some weekend days, and the general upheavals that can throw a routine completely off kilter. But that too is learning. Upon realising that upheavals seem to be happening frequently, I will look at the timings in my day, make adjustments, move some AM things to lunchtime or the evening, and over time, things flow smoothly again.

I tend to keep this document open through the day, and check in at least twice. I find the mid-day check really useful now that I have a sizeable number of habits.  I can then stay on track with my commitment to the day’s healthy habits.

Idea starters for your morning routine

The habit tracker tool above comes pre-loaded with the first 3 habits we have talking about building together this year on The Confidence Kitchen:

These 3 were chosen for a reason: They are a powerful trio to hydrate you, flush toxins out and flood your body with antioxidants for good health.

From there, consider choosing to add a few more habits that you are excited about building into your life each week. It’s best to go slow and only work on adding one or two tiny habits at once. This is a long game. We want our habits to stick.

Everyone’s morning routine is personal and changes over time. Below are some idea starters to add to your list of daily habits you might want to track this year.