Today we’re moving beyond basic green smoothies into health warrior territory! Black beans in my morning smoothie! What? This might seem a little weird at first, but if you think about Mexican cuisine, you remember that black beans, cinnamon, and chocolate were born to have parties together!

Benefits of this green smoothie 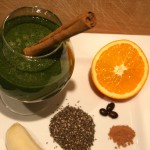 If you’re doing the

2 green smoothies a day challenge, this recipe is great as it makes 2 perfect portions.

This smoothie contains some of my favourite foods. Each and every day I make sure that I eat a minimum of 1/2 cup of beans (various types), 1 tsp of cinnamon, and 2 Tbsp of chia seeds.  This smoothie helps me to check them off my list nice and early in the AM! What I am enjoying about black beans right now is that they are moving out of the land of savoury and gaining popularity pairing with chocolate and cinnamon flavours in sweet recipes! There are more and more great healthy dessert recipes coming out each  month that feature the three together.

Here’s a tip: When I made this in the “test kitchen” I had a few batches that seemed a bit too “full of beans!” If ever the smoothie wasn’t working, it was because the banana I chose was too small. Make sure you use a large banana, or add a couple of extra banana chunks to get it to the sweetness you like. Then all the flavours are tied together and the smoothie becomes so nice and creamy, chocolately, rich and satisfying. Getting this much fibre from drinking 2 tasty glasses of liquid a day was so amazingly easy that I had to share the secret![/fusion_builder_column][/fusion_builder_row][/fusion_builder_container]